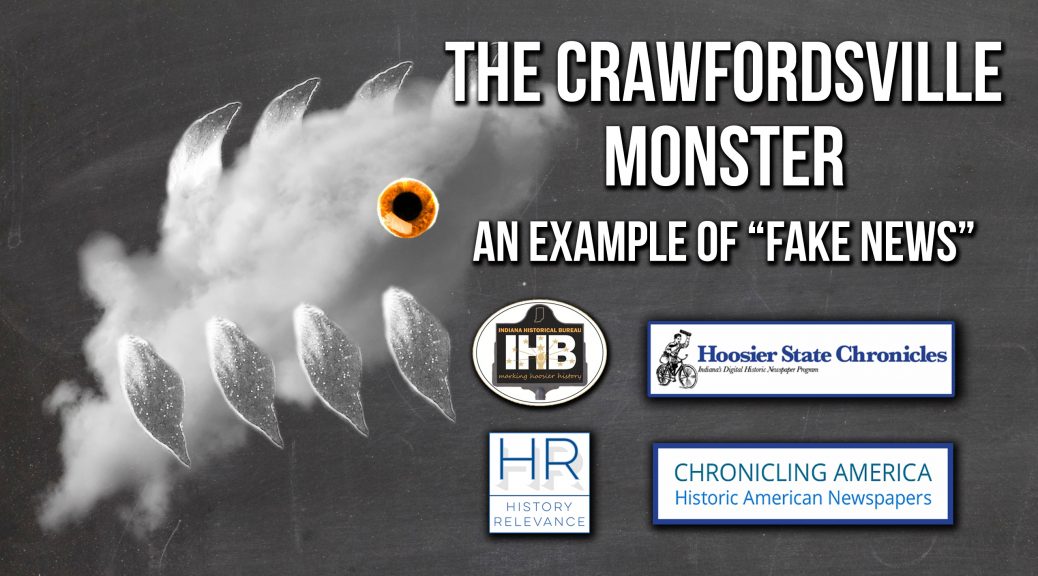 In Indiana during the 1890s, a creature feature known today as the “Crawfordsville Monster” became fodder for newspaper headlines. People throughout the town claimed they saw this “horrible apparition” in the sky. While the monster’s origins were eventually discovered to be earthly bound, the legendary status of the monster speaks to the power of fake news.

These days, it’s hard to ignore the problem of “fake news”; it’s everywhere! Whether it’s supposed UFO’s flying across the sky or a special restaurant that caters to celebrity cannibals, fake news continues to degrade our public discourse.

One continued part of fake news is even older than the term: creature sightings. Bigfoot, the Mothman, Chupacabra, the Loch Ness Monster, Mokele Mbembe (that’s a living dinosaur). Encounters with these mythical creatures have been reported by scores of witnesses, yet most are hoaxes or exaggerations. In Indiana during the 1890s, a creature feature known today as the “Crawfordsville Monster” became such fodder for newspaper headlines. People throughout the town claimed they saw this “horrible apparition” in the sky. In a matter of days, the story spread from Crawfordsville, to Indianapolis, and then to Brooklyn, New York! While the monster’s origins were eventually discovered to be earthly bound, the legendary status of the monster speaks to the power of fake news.

The legend begins with two ice mongers, Marshall McIntyre and William Gray, who reportedly saw a mysterious entity in the sky on the morning of September 5, 1891. As described by the Crawfordsville Journal, it was:

. . . about eighteen feet long and eight feet wide and moved rapidly through the air by means of several pairs of side fins. . . . It was pure white and had no definite shape or form, resembling somewhat a great white shroud fitted with propelling fins.  There was no tail or head visible but there was one great flaming eye, and a sort of a wheezing plaintive sound was emitted from a mouth which was invisible.  It flapped like a flag in the winds as it came on and frequently gave a great squirm as though suffering unutterable [stress this in reading] agony.

The two men, shaken by what they had seen floating between three and four hundred feet in the air, swiftly corralled their horses and left.

Now, McIntyre and Gray’s experience might have been disregarded as a tall tale if not for the testimony of Reverend G. W. Switzer, who also claimed he saw the monster. A couple of hours before the ice guys’ encounter, the Methodist pastor reportedly saw something “about 16 feet long and eight feet wide, resembling a mass of floating drapery.” Enthralled by the creature, he and his wife watched it glide through the sky for a while before they returned to bed. His description of the experience, as quoted in the Crawfordsville Journal, leaves one with a haunted image in the mind:

Within two days of the Crawfordsville Journal publishing their first story on the monster, the generally sober and high-browed Indianapolis Journal released their own telling of the events, which reaffirmed the credibility of Switzer in the eyes of the public. “The story received unexpected corroboration to-day [sic] from a source that leaves no doubt that some undefinable aerial Spector visited the Athens of Indiana . . . .” The story then spread across the country. On September 10, 1891, just five days after the events took place, the Brooklyn Daily Eagle ran a story on the encounters. As the story circulated, people’s anxieties grew. A woman in St. Louis wrote a frantic letter to the Crawfordsville Journal asking if the entity could be seen in the daytime, what color it was, and whether or not it was going west. For the nineteenth century, this was as close to “viral” as you could get.

Ok, so what exactly was the Crawfordsville Monster? The answer was either one of two things. First, it may have been “a flock of many hundred killdeers,” as local investigators John Hornbeck and Abe Hernley reported to the Crawfordsville Journal. The birds were “evidently passing over the city and becoming bewildered by the [newly-installed] electric lights and lost their way.” Or, if you’ve ever witnessed a flock of murmurating starlings, you could imagine how that’d look at night. [Cue screech SFX] Another possible explanation for the beast was balloons. Yeah…balloons. The Wichita Daily Eagle noted that:

Boys in Crawfordsville, Ind., have a balloon parachute craze, and cats are daily sent up, the parachute being so arranged that it will detach itself from the balloon at a certain time. The cats are not taking too kindly to this aeronautic mania.

If I was awakened to the sound of frightened, mewling cats as they flew across the night sky in balloons, I’d likely be scared out of my wits as much as these folks.

Now, what’re the lessons here? First, don’t fly cats up in balloons. They’ll likely get hurt or, at the very least, resent you for your choice and take it out on your couch. Second, it’s best to follow an age-old adage: don’t apply a supernatural explanation when a perfectly natural explanation will do. These newspapers printed all kinds of speculations about what the monster was even though it was likely a flock of birds or a bunch of balloons (with cats). And finally, don’t be like the woman in St. Louis and be swept in by fake news. Newspapers then and now have constantly fought for your attention and sometimes they don’t care how they get it. It’s important to use common sense and critical thinking to separate fake from fiction, real from fake. In doing so, you’ll save yourself the worry that can be caused by overblown headlines.