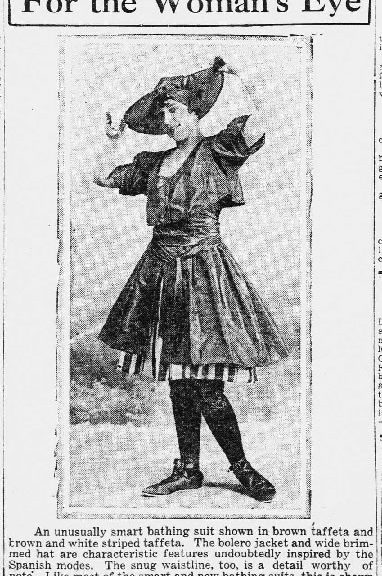 Bathing suits and policing decency have often been a topic of discussion and contention, as noted in a previous Chronicles post. However, while looking through reels of newspapers from 1916-17,  we became intrigued by the affect of World War One on the loosening of gendered fashion restrictions, especially as exemplified by the bathing suit. Here we look through articles, illustrations, photographs, and advertisements at the ways Hoosier women reacted to trends in the context of WWI when bathing suits had become shorter and sleeveless, but fabrics were still thick and heavy, a holdover from an older era.

The Victorian bathing gowns of the previous century were floor-length and made of dark heavy fabric that wouldn’t float up or become transparent.  According to the Smithsonian Magazine, some women even sewed lead weights into the hems to prevent exposure of the calf. By the early 1900s bathing costumes became knee-length dresses or tunics and were paired with bloomers or tights, “all of which were made from heavy, flannel or wool fabric that would weigh down the wearer, not quite convenient for negotiation the surf,” according to the same article.

World War One changed fashion dramatically in large part because women’s roles changed  in wartime as they took on physical jobs such as factory and farm work, in addition to nursing. Manufacturing jobs also made shorter hair more practical and the corset impossible.  Gendered fashion rules relaxed in general to the point where it was even acceptable for women to wear pants for manual labor activities — though it would be decades before they were acceptable beyond certain activities, according to Nina Edwards’ Dressed for War: Uniform, Civilian Clothing & Trappings, 1914 to 1918.

The rules of decorum were also relaxing in the world of sports as women took up tennis, skiing, and swimming in greater numbers. Pants were allowed on the tennis court and slopes. While bathing suits generally maintained their dress-like appearance for the average beach goer, athletic and competitive swimmers opted for suits that didn’t impede their sport.  These swimsuits that allowed for actual swimming eventually infiltrated the mass market as well.

Hoosier women found out about these trends and where to purchase their beach attire through newspaper articles and advertisements.  Indiana newspapers regularly ran illustrated articles about the newest fashions from the east coast beaches, such as this snippet from the Richmond Palladium Sun-Telegram:

Articles could be more extensive as well, taking up almost an entire page such as this 1917 article from the South Bend News-Times with the intriguing headline:

The article notes the relationship between sportswear trends and swim wear:

This season sees the bathing suits carrying out the same colorful note that predominates in all sports clothes and in materials there is also a similarity, namely, in the use of one of the most favored of fabrics — wool jersey. This versatile material seems to make itself at home in any sphere. After having made its importance felt in sports clothes, one-piece frocks and semi-informal suits, the bathing suit has been lately added to its conquests.

The article continues to describe  and illustrate the season’s other popular fabrics:

Yet, other materials compare very favorably with jersey cloth at the fashionable beaches. Black satin has lost none of its usual charms; taffeta, mohair, alpaca and poplin still retain their popularity; and the rubberized cloths are likewise favored to a great extent.

In the summer of 1917, the Lion Store in Hammond, Indiana, encouraged its neighbors to “spend Sunday in the cool, refreshing waters of Lake Michigan” through this advertisement in the Hammond Times [below].  And what is more cool and refreshing on the skin than dark-colored wool?  The women’s “All-Wool Bathing Suits” were available with a fitted waist, wing sleeves, and “piping and trimmings in contrasting colors” for the low price of $3.98.  However, one would still need the appropriate matching rubber “Swim Kap” ($.50) and “Beach of Swim Shoes, made of sateen with canvas covered soles” ($.25). For just a bit more, however, one could purchase one of “The New ‘Liberty’ Swim Caps, made of all rubber, red crow, blue band with white stars, finished with rubber rosette. As the South Bend News-Times reported:

A complete bathing outfit by no means ends with the selection of the suit. Beach wraps, hats and caps, shoes and stockings, are quite as important.

Also in the summer of 1917, the nearby competing department store, the E. C. Minas Company, advertised that they could beat the Lion Store’s prices! As advertised also in the Hammond Times, some of their suits were only $2.00 and they offered Bathing Tights.  Bathing tights were usually dark in color and meant to compensate for the shorter hemlines and sleeveless styles of the era’s new suits. They could be worn instead of the looser bloomers.  If you weren’t quite ready for such a propriety-challenging costume, however, they also offered the “bathing corset.”

E. C. Minas also had the gentleman bather covered.  They could choose between the “all-worsted,” aka wool, one-piece suit pictured in this advertisement in the Hammond Times [also below] or a two-piece version with flannel pants. The straw hat was a must as well, apparently.

Besides loosening rules for women (and to a lesser extent) men to keep pace with changes in work and sport, the war changed the outlook of those affected by it and, in turn, the way they dressed.  The horrors of war and personal loss contributed to a greater consciousness  mortality and feeling that anything could happen at any time.  For some, this meant that they should live for today and in the moment, thus setting the stage for the fashions and attitudes of the Jazz Age, when fashion would “decree” much different aesthetic rules.  Search Hoosier State Chronicles for more articles on bathing suits!  Combine terms “beach” and “bathing” with “suit,” “outfit,” and “costume.” Let us know what you find on Twitter: @HS_Chronicles