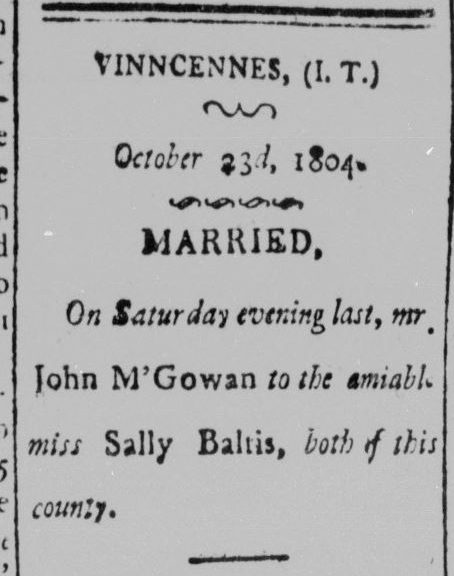 The New York Times recently ran a piece about its long and interesting history of wedding notices, specifically its first notice published on September 18, 1851. Sarah Mullett and John Grant were married by the Reverend Thomas P. Tyler at Trinity Episcopal Church in Fredonia, New York on September 10, 1851. It got us at Hoosier State Chronicles thinking about wedding notices in our neck of the woods. Throughout the decades, newspapers from all across Indiana published wedding notices, sometimes before the wedding and sometimes after, and occasionally with extended coverage of the ceremony. In this blog, we will take you through a few notices to give you a sense of how Indiana newspapers covered Hoosiers tying the knot.

MARRIED, On Sunday evening last, Mr. John M’Gowan to the amiable Miss Sally Baltis, both of this county [Knox County].

Besides the word “amiable,” this notice contains very little information, despite the couple being local. Similar wedding notices were published in the Vincennes Western Sun in 1810 and 1814 and the Charlestown Indiana Intelligencer in 1825.

Early Indiana papers also published breaches of marriage. For example, a piece in the December 14, 1816 issue of the Western Sun  noted that a “breach of marriage promise, between Margaret Logan, plaintiff, and Rob[er]t Gray defendant, was yesterday tried in the Court of Common Pleas of this county [Knox County].” The trial resulted in a “verdict for $1,000 [in] damages—the sum claimed in the declaration,” likely going back to Logan.

Another common tradition in the early years of wedding notices was the use of the subheading “hymeneal,” meaning “nuptial.” Sadly, one of the early uses in the Indiana Republican misspelled the word as “hymenial,” which is a type of fungus.  Nevertheless, papers like the Republican used the term during the early half of the nineteenth century, as a way to group a few wedding notices into a single piece. The Republican hymeneal from 1817 (with the misspelling) provided notices for two weddings, separated by an anonymously authored poem:

Not Eden with its shades and flowers,

Was Paradise till women smil’d; –

Then what’s this dreary world of ours,

In an April 27, 1838 issue of the Brookville American, another Hymeneal, spelled right this time, ran on the third page. Four separate weddings from both Indiana and Ohio make up the column. One particular wedding announcement went out late, so it came with an “apology to the parties . . . that it was mislaid.”

Alongside descriptions of wedding notices, newspapers also advertised the costs of publishing a notice. An advertisement in the December 24, 1855 issue of the Indianapolis Daily State Sentinel displayed the cost of publishing a marriage notice as $1, which in 2016 dollars amounts to $15.92. Still a bargain, if you want people to know about your wedding.

By the 1870s and 1880s, the notices kept the same style but lost some the century’s earlier pretensions. For example, the term “hymeneal” went to the wayside, in favor of a more generic “announcements” section. This is exactly how the Indianapolis News published a wedding notice in its February 12, 1885 issue.

That’s not to say there were not outliers. One of the most interesting newspapers available in Hoosier State Chronicles is the Smithville-based Name It and Take It!. A rather obscure paper, it only ran a few months in 1897 before folding. In the June 25, 1897 issue, a wedding noticed was published under the heading of “ROMANTIC!”, the use of an exclamation point being the standard practice on nearly every piece in the notices section. “The Rev. A. S. [Alexander “Sandy”] Baker married a couple on short notice last Saturday, in the clerks [sic] office at Bloomington. The contracting parties were: John Worley, and Catherine Adams,” the paper reported. Based on the exclamation point heading, the paper wanted you to be as excited for the couple as they apparently were.

By the early 20th century, some wedding pieces became slightly more irreverent, like human interest stories you might read in your local paper. In the July 16, 1908 issue of the Richmond Palladium, an article ran entitled “Married in Shirt Waist and Skirt.”  Ted Hall, “a young business man of St. Louis,” arrived in the city, quickly proposed to “Miss Nettie Lamar,” and they were married the same day. As the paper noted, the “ceremony was set in such a short time that the bride had to be married in shirt waist and skirt.” This would be the equivalent of a young lady getting married in a pair of capris and a t-shirt today, which is quaint, even charming.

The Indianapolis News during the 1910s provided a large section of its paper to marriage notices, with notifications from all over the state. This trend continued well into the 1920s, as exemplified in an April 29, 1929 issue of the Greencastle Herald. One particular nicety that the Herald extended to the newly-wedded couples was delaying the publication of the notices, after an arrangement with the county clerk.

Other newspapers gave their wedding notice section clever titles. In a 1939 issue of the Indianapolis Recorder, the paper named its section “In Dan Cupid’s Files,” and provided nine separate notices (one was an engagement). One interesting notice noted that “Miss Ella Louise Freeman and L. C. Phelps were secretly married in Chicago” the previous March and then intended to “reside in Philadelphia.” This notice brings up so many questions. Why were they “secretly married?” What necessitated that chain of events? How did their parents feel about it? These would be great topics of research for a more in-depth analysis of wedding notices. However, that is outside the scope of this short tour.

Some wedding notices were so detailed that they warranted a front-page publication. This was the case with a notice published in the August 16, 1940 issue of the Dale News. Robert J. Lubbehusen, a U. S. Navy officer, and Miss Frances Fuchs, “second daughter of Mr. and Mrs. Ed Fuchs of St. Meinrad, Ind.” were “quietly married in the Abbey Church” in St. Meinrad. The unincorporated community of St. Meinrad houses a monastery and church for Benedictine monks. As their website describes, “Saint Meinrad Archabbey was founded in 1854 by monks from Einsiedeln Abbey in Switzerland. They came to southern Indiana at the request of a local priest who was seeking help to serve the pastoral needs of the growing German-speaking Catholic population and to prepare local men to be priests.” The small town newspaper published this notice on the first page, which was probably otherwise a slow news week. Additionally, Lubbenhusen’s active service in the Navy, roughly a year out from American involvement in WWII, may have inspired a front-page notice.

By the 1950s, photographs became a more standard practice for wedding notices in Indiana papers. The Jewish Post ran a full-page wedding notices section with mostly photographs of happily-wedded couples either leaving on their honeymoon, walking down the aisle together after the ceremony, or cutting their cake. Alongside the couples, the Post also published the names of their photographers, Miner-Baker and Julius Marx. Not only did this give credit where credit was due, but it was great advertising for the photographers. Engaged couples could see these nice photos in the paper and then follow up with Marx or Miner-Baker to have them photograph their unions. The wedding notice as advertisement represents another interesting development in Indiana wedding notices.

The last three wedding notices on this tour of history, from the 1960s, 70s, and 80s respectively, indicate that while wedding notices have changed since the beginning of Indiana’s history, they maintained a basic structure. The September 23, 1960 page of wedding notices from the Jewish Post provided the same familial and logistical information, but it also included details on the bride’s dress. The bride, Elayne Rosanne Kroot:

This notice’s level of detail contrasted the more direct, less detailed notice for another couple on the same page. (The wedding notice in the August 24, 1979 Jewish Post also displays a shorter, more direct style.) This contrast suggests a subtle distinction of class, where the longer, more detailed notice cost more to publish than the shorter notice. Again, this would be a great avenue for future research.

Our last notice page comes from the June 23, 1984 issue of the Indianapolis Recorder. These notices might be the most complete notices we will unpack in our journey. The notices are detailed, with logistical information, details on the bride’s dresses, the musical arrangements (including songs played), and a rough timeline of the entire ceremony and reception. These were also paired with photographs of the happy couples. To see the most modern representation of wedding notices, this is one of the best examples from Hoosier State Chronicles.

With that, our trip though Indiana’s wedding notices has come to an end. If you’d like to see more notices, head over to Hoosier State Chronicles.  If you search “wedding” or “married,” you get literally thousands of hits, from nearly 200 years of Indiana newspapers. There’s certainly more than a fair share of Hoosier weddings to explore.