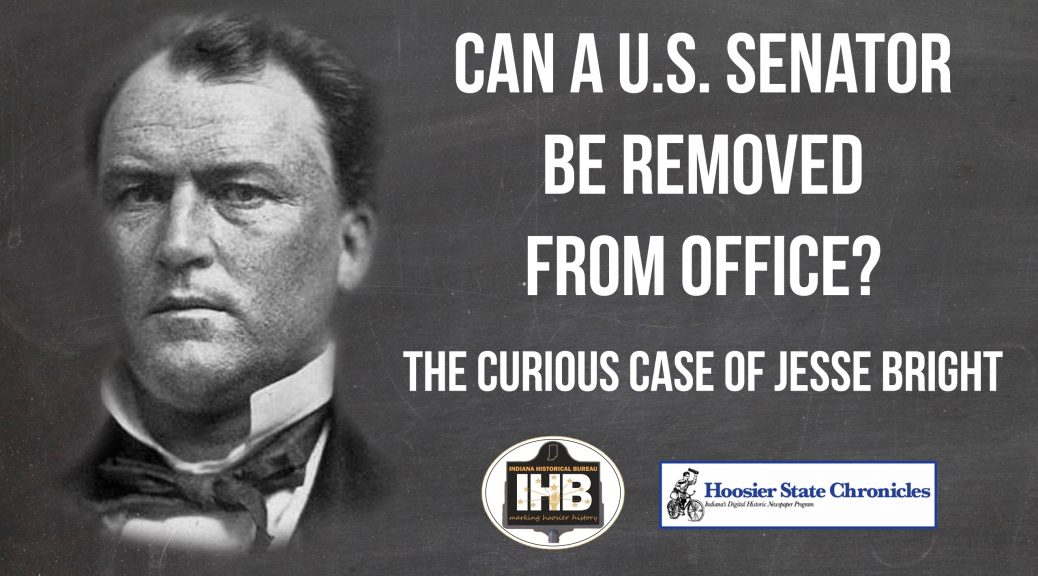 There’s a lot of talk these days about presidents being removed from office. We’ve seen at least three times in American history when Congress nearly did just that. But, there’s always other politicians whose actions garner so much controversy that they’re kicked out altogether. In this video, we consider the case of Jesse Bright, a US Senator from Indiana whose coziness with the Confederacy led to his ouster from Congress.

There’s a lot of talk these days about presidents being removed from office. We’ve seen at least three times in American history when Congress nearly did just that. But, there’s always other politicians whose actions garner so much controversy that they’re kicked out altogether. Consider the case of Jesse Bright, a US Senator from Indiana whose coziness with the Confederacy led to his ouster from Congress.

Bright exemplified the typical upland Southerner Hoosier politician. Born in 1812 in New York, he eventually settled in southern Indiana with his wife, who was from Kentucky. While he was a resident of Indiana, he also owned land in Kentucky, where he kept his 21 slaves. As a staunch states-rights, pro-southern politician, he rose quickly through the ranks of the Democratic Party before his election to the U.S. Senate in 1845, later serving as President Pro-Tempore. While some described him as a man with “great energy of character, with good common sense, and an iron will,” his lack of will with the Confederates in the winter of secession got him in hot water.

In March of 1861, Bright wrote a letter offering “a great improvement in fire-arms” from a colleague in Texas for the burgeoning Confederacy . . . to Jefferson Davis. Yeah, that Jefferson Davis. As a sitting United States senator, Bright sent a letter of aid to the President of the Confederacy. So, as you would expect, that didn’t go over so well.

In December of 1861, a resolution was introduced to have Bright removed from office. For context, Article I, Section 5, clause 2, of the Constitution grants Congress the authority to remove a Senator or Representative with only a two-thirds majority vote in both houses. This can happen either for breaking the law or for “perceived disloyalty to the United States.” The latter is exactly what happened with Bright.

Initially, the Senate Judiciary Committee moved not to expel Bright, but the momentum against him continued to grow, especially among pro-Union Republicans. With pressure mounting, Bright tried to defend himself with a speech that was published in full in the Plymouth Weekly Democrat, who argued that Congress’s actions violated his freedom of speech. Bright declared that the accusations against him were essentially a witch hunt, ginned up by the more extreme Republicans who saw his actions as treasonous merely by association. As he saw it, he had written to Davis a month before shots rang out at Fort Sumter, so there’s no way he would’ve seen the consequences of his actions. As he noted, “. . . are you going to say that every man who engaged in trade, commerce or correspondence with the South prior to this time is disloyal or guilty of treason? Are you prepared to assert this principle of ex post facto tyranny?”

Apparently they were. On February 5, 1862, the United States Senate voted 32 to 14 to expel Jesse Bright. The newspapers, bastions of partisan rancor, responded to his expulsion in all the ways you’d imagine. The Republican Chicago Daily Tribune hailed his removal as a victory, saying that “is it a subject for congratulation that the Senate chamber is gradually being purified.” The Bedford, Pennsylvania Inquirer agreed, noting that “the Senate has done itself honor by this decisive condemnation of treason among its members.” In Indiana, the Marshall County Republican minced no words when it called Bright’s actions “treason” and defended the Senators who expelled him.

Democratic papers sang a very different tune. The Cadiz, Ohio Sentinel wrote that “We do not believe that there is, outside of the Abolitionists, in the State of Indiana, a traitor” and that his expulsion carefully ignored the actions of Secretary of State William Seward and President Abraham Lincoln in bringing the country closer to war. The Indiana Daily State Sentinel published a short editorial accusing the Senate of diverting the Constitution and the cause of Union by expelling Bright for nothing more than “entertain[ing] views obnoxious to the feelings of that body!” In a further move of political gas-lighting, the Sentinel noted that if Bright could be removed for his actions, Senators John Hale and Charles Sumner should be removed because their abolitionist beliefs forced the South toward secession.

So, what lessons can we take away from the removal of Jesse Bright? First, don’t write a letter to Jefferson Davis offering guns from a friend when you’re a sitting US Senator. Second, Senators can be removed from office for as little or as much as its members are willing to tolerate; it only requires a two-thirds vote from both chambers of Congress for removal. In this case, it garnered predictable, partisan responses, with Republicans confident in their removal of a supposed traitor and the Democrats outraged that a Senator was removed from office for only writing a letter. With hindsight being 20/20, the Republicans were right. Bright, a Senator for the Union, had offered the Confederacy military aid for its cause only a month out from the start of the Civil War. For context, the “cause” of the Confederacy was to create a government based on the subjugation of an entire people with slavery. No matter how benign his intentions may have seemed, the optics were absolute garbage. Finally, it’s important to keep this story in mind for the future. No matter how bad a politician’s actions may be, the typical ideological barriers will still be set and people will still respond accordingly. In that regard, we haven’t changed much at all.