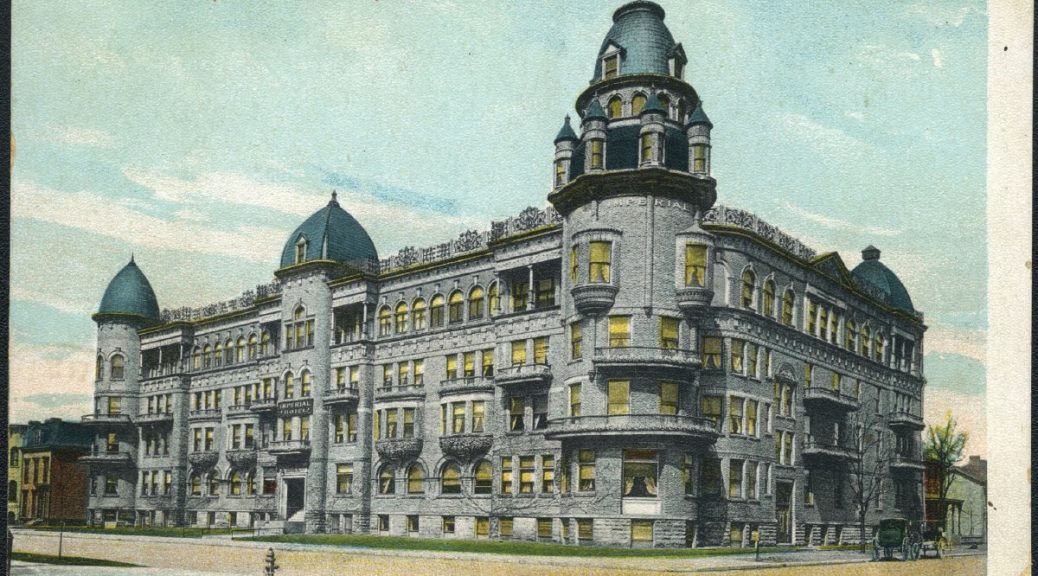 During the latter half of the 1800s, Indianapolis was served by one of the best surgical institutions in the country. Dr. Horace R. Allen and his team at the National Surgical Institute focused on improving the lives and medical methods for the treatment of individuals with physical disabilities and orthopedic challenges. Originally founded in Charleston, IL in 1858, the institute grew when they moved their operation to the much larger city of Indianapolis in 1869. For nearly forty years, the organization drew patients from throughout the country to receive specialized treatment while also serving the emergency medical needs of the industrialized city, eventually expanding to other sites throughout the country. A tragedy cut short the mission of the Indianapolis location, but their efforts to improve the lives of the public changed the medical landscape and opportunities for the citizens of Indiana.

Physical deformations and muscular/skeletal damage are a major part of our modern culture, and pain relief resulting from these issues has become a major industry. The rise of prescription medicine usage to treat these conditions, particularly opioids, had led to serious questions about appropriate ways to treat pain. Alternative care, such as chiropractic treatments, orthotics, and physical therapy are now commonplace for both the general public and athletes. Congenital issues like cleft palates and club feet are rare in adults or teenagers in America, often being treated relatively soon after birth with surgery. Even when adults suffer from issues like rheumatoid arthritis, modern medicine can often prevent the characteristic deformity of hands and other joints.

This was not always the case. In the mid-19th century, surgeries were still experimental in many fields and fatalities were high. One Washington Post article describes some of the challenges from medical care at the time, including untrained physicians, poor hygiene, and limited pain relief or anesthesia. Sadly, this often meant a lifetime of pain and isolation for individuals with these conditions.[i]  An article from Collector’s Weekly in 2015 addressed the prevailing attitudes of the mid-1800s for individuals living with deformities, including the attempts of society to “fix,” ignore, mock, and experiment on this population.

The National Surgical Institute of Indianapolis, and its founders Dr. Horace R. Allan and Dr. W.P. Johnson, attempted to change both conditions and attitudes. They believed orthopedic surgery was a specialty that many family physicians and other surgeons didn’t understand fully, and that treatments were often ineffective due to improper equipment and training. An 1885 pamphlet from the organization articulates the purpose for founding this organization:

Upon arriving in Indianapolis in June of 1869, the Institute settled on the corner of Illinois and Georgia Streets in the former “Farmers’ Hotel” building. Upon reaching Indianapolis, they partnered with Dr. Charles L. Wilson, a specialist in ear and eye care, as well as other specialized physicians in the city. Dr. Allen became the face of the organization, and often took the lead in administrative matters.

The first medical emergency handled at the new location was the Sinker-Davis boiler accident at the State Fair Grounds, which were located at 19th and Alabama Streets at the time.  The sudden explosion of a boiler during a steam-powered saw-mill demonstration on October 1, 1869 killed between twenty and thirty individuals and injured many more. The Institute took in a large number of those affected by the accident and offered care for free, a practice that continued throughout their time in the city.

In fact, the Surgical Institute frequently treated patients for accidents and injuries due to their central location in the city, as many other hospitals were further from the city center. This was particularly important in a period of rapid industrialization, when workplace accidents were common, often resulting in major injuries, amputations, or death.

While the institute often served the public in general care or emergency cases, the National Surgical Institute specialized in the treatment of individuals with physical deformities. More than that, as many of their promotional materials suggest, they sought to remove some of the concerns that prevented individuals from seeking care, such as trustworthiness, cost, and convenience, for their patients. Trustworthiness was of prime importance due to the prevalence of under-trained doctors or skeptics of the profession. This excerpt from their 1876 self-published trade book explains the qualifications of the organization:

In the treatment of ordinary fevers and diseases of the country, your physician would doubtless excel us; but with Institutions of original and most approved character, with ample means and every conceivable apparatus and facility, and with varied and valuable experience of having treated over thirty thousand cases, we do not consider ourselves vain or boastful in saying that it is in our power to excel, and effect cures impossible to them.

The Surgical Institute often focused on changing body mechanics to strengthen and utilize areas that may suffer from deformation to help overcome limitations, rather than focusing on drug usage or unnecessary surgeries.[ii] Techniques utilizing atmospheric pressure were often applied to stimulate areas where muscle loss or minimal movement existed previously. They treated everything from spina bifida, to club feet, to rheumatoid arthritis. According to “The History of Indianapolis and Marion County,” Dr. Allen’s “mechanical surgery” treatment methods were adapted in England. The technology he developed even won an award for “Instruments of Medicine, Surgery, Etc.” at the 1876 Centennial Exhibition in Philadelphia. However, newspapers of the time rarely covered the stories of therapeutic treatment, other than to say that patients were treated by the National Surgical Institute.

The success of the organization in Indianapolis led to the development of other locations in the country. By 1875, the organization expanded to three other locations in San Francisco, Atlanta, and Philadelphia. Initially, sharing news of the Institute was difficult due to restrictions on taking out advertisements about medical treatments. However, heavy promotion in the 1870s, as well as direct promotion to potential patients, brought in many individuals. Rival surgical institutes began springing up throughout the country during the 1880s and ‘90s, including organizations in Terre Haute, Louisville, Champaign, Chicago, and Buffalo, all of whom sought publicity in Indiana newspapers:

This is not to say the Institute was beyond scrutiny. Several individuals reported patients on the sidewalks in front of the institute and were characterized as “advertisement” for the institute.  By the early 1890s, the NSI was still performing many successful surgeries, but a series of troubling incidents occurred with the building, including several small fires and the collapse of a chimney in 1891:

This event was not isolated, and clearly there were issues with the safety of the building, despite assurances of safety from the owners. Unfortunately, a horrific fire in January of 1892 proved to be fatal, killing nearly twenty individuals and injuring several more. The Indiana State Sentinel, which had previously written glowing reviews of the Institute, was one of the local newspapers that called the building a “deathtrap” and suggested the building should have been condemned. Many blamed Drs. Allen and Wilson for allowing improper living conditions, but both were absolved from responsibility for the fire by the coroner a month later, (although not a popular decision at the time, as the deputy coroner resigned his post following the decision).

In March, Allen suggested he was considering moving the Institute out of Indianapolis in a letter to the Commercial Club, covered by the Indianapolis Journal. The letter indicated the weight that financial difficulties and public scrutiny from the fire put on Dr. Allen, and he did not feel supported in rebuilding the Institute in Indianapolis.[iii] Yet, by mid-May, plans for a new building were drawn up to be built on the corner of Ohio and Tennessee Streets (Capitol Avenue), directly across from the Indiana Statehouse. Dr. Wilson left the Institute by 1893 to start his own competing surgical institute in town, leaving Dr. Allen as the sole proprietor.

Renaming themselves the “H.R. Allen National Surgical Institute,” the organization continued on for a few more years under the control of Dr. Allen. However, the financial strain on the organization led to the eventual closure of the Institute by 1898. The building was sold, eventually becoming the Imperial Hotel. Dr. Allen passed away two years later in Chicago, and is buried in Crown Hill cemetery in Indianapolis.

Despite the sad ending to the National Surgical Institute, tens of thousands of individuals were bettered by the work of the organization. Being at the center of a major city allowed them to be connected to the needs of the public in the area and convenient to people travelling for treatment. The prominence of this organization may have helped inspire the boom of surgical institutes throughout America in the 1880s and ‘90s, offering a new level of care and supporting the work of specialized care for difficult-to-treat conditions, as well as treating serious accidents. Most importantly, the National Surgical Institute placed patient interests at the forefront of their mission and goals, and sought to serve them with innovative care.

List of awards made by the United States Centennial commission to the American exhibitors, International exhibition 1876, at Philadelphia. (S.T. Souder & Company, Philadelphia, 1876). Accessed from Archive.com via Library of Congress, 03/04/2019, https://archive.org/details/listofawardsmade00unit/page/112.

Sarner, Moya. “Back pain: how to live with one of the world’s biggest health problems” from The Guardian, June 14, 2018. Website, accessed 03/04/2018, https://www.theguardian.com/society/2018/jun/14/back-pain-how-to-live-with-one-of-the-worlds-biggest-health-problems

[ii] In fact, the Institute even suggested that they could cure opium addiction in the January 25, 1878 edition of the Indianapolis News. No details were provided of the treatment method, nor were there successful cases mentioned, but patients who attempted the cure were assured of “no charge” if it didn’t succeed.

[iii] For more information on the fire and the immediate reaction in the newspapers, read Libby Cierzniak’s Historic Indianapolis article, “Indianapolis Collected: After the Fire”.