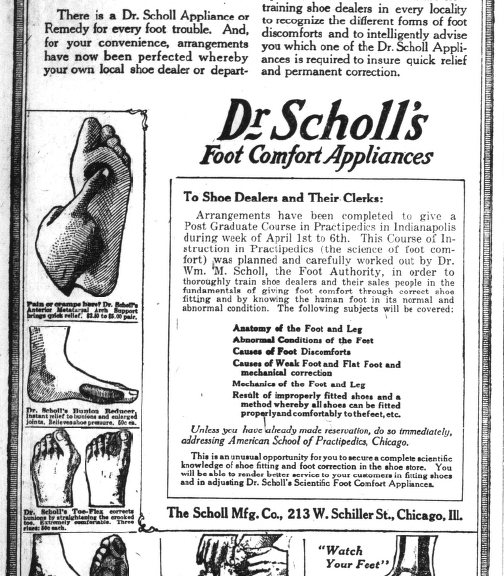 Many companies choose a face for their brand and then build a mythology around it. For example, the Converted Rice Company marketed their new parboiled, vacuum-dried rice as the homey-sounding “Uncle Ben’s Rice.”  The company used the racially charged nomenclature “uncle” and an image of a distinguished-looking African American man to imply that the product would be like a friendly servant for the housewife.  The company  has claimed at various times that “Uncle Ben” was a respected rice grower or a hotel maitre d’, but more likely he never existed — much like Mr. Clean, Sara Lee, or Mr. Goodwrench.

While there are plenty of questions surrounding his origin story, the man called “Dr. Scholl,” was not only the founder of one of the most famous companies in the world and the inventor of many of its products, but he was a master of the world of advertising — changing the business in innovative ways. Scholl may (or may not) have been a quack doctor, but he was a crackerjack businessman.

William Mathais Scholl was born on a farm in Kankakee, LaPorte County, Indiana in 1882.* According to the 1900 census, William spent his youth working as a laborer on his parents’ farm, along with many other siblings.  Sometime around 1900, Scholl moved to Chicago and found a job as a salesman at the popular Ruppert’s Shoe Store on Madison Street. Here, he encountered a variety of foot problems faced by his customers and became interested in podiatry. That same year, secondary sources claim, he enrolled in medical school at Loyola University. This has been hotly debated.

Despite investigations beginning in the 1920s and continuing today, it is still unclear if Scholl graduated with a medical degree around 1904 as he claimed. The Scholl College of Podiatric Medicine in Chicago supports the Scholl Museum which is dedicated to memorializing his achievements and authoritatively refers to him as “Dr. William Mathias Scholl.” However, the records of the American Medical Association tell a different story.  According to Robert McClory’s investigative piece for the Chicago Reader in 1994:

“Visit the recently opened Scholl Museum . . . and you’ll find the doctor and his achievements raised to almost mythic levels . . . But check through the old AMA records and you’ll read about a man whose credentials are ‘entirely irregular,’ whose methods smack ‘strongly of quackery,’ and whose products ‘cannot be recommended’.”

There are also questions about his state medical license, as well as a later degree he claimed from the  Chicago Medical College, an institution described by the American Medical Association as “low grade.” The AMA described Scholl’s “whole record” as “entirely irregular.”

Dr. Scholl, or “Dr.” Scholl,  built an empire which has made his name recognizable all over the world.  Degree in hand or not, at the turn of the twentieth century, young Scholl was busy inventing various devices intended to alleviate foot pain.  One such device was the “Foot-Eazer,” which was  a hit with the Ruppert’s Shoe Store customers. Supposedly one customer offered him several thousand dollars to start his business.  He declined the offer, but was inspired to start his own business.

In 1904, Scholl set up shop in a small office in a building at 283-285 E. Madison Street in Chicago – the first location of the Scholl Manufacturing  Company. By the next year, he began innovating new advertising techniques.  Scholl would purportedly travel to various shoe stores, ask for the manager, and take out a human foot skeleton and put it on the counter. He used the foot to show how complicated and delicate all of the tiny bones are that hold so much weight and take so much abuse.  He would demonstrate how supportive and comfortable his products worked.

Whether or not his products worked, his strategy of marketing directly to the store manager did. In addition to charging for the construction of the product, he also charged for consultations and fittings.  Business boomed and in 1907 he moved into five rooms in a building on Schiller Street which had been abandoned by Western Wheel Works, a bicycle company.  Almost immediately, he purchased the building and expanded the factory until it took up the entire block.  The building stands and is in use as the Cobbler Square apartment complex —  a nod to it’s former use.

By 1908, Scholl was using advertisements in trade journals to continue marketing his products directly to shoe store owners and managers.  His approach at this point was to set up a booth at various fairs and train these prospective clients on how to talk about the Foot-Eazer “from a scientific prospective.” The ad below addresses these shoe store managers with several lofty promises about the Foot-Eazer:

“It will pay you well to be an expert in correcting foot troubles. . . you can sell a pair to one customer out of every three. Your profit is a dollar a pair – if you have 3000 customers that’s a thousand dollars for you . . .You will understand the science of it the moment you see it . . . as I have been allowed sweeping patents on it no one else can make anything like it.”

Scholl explained to this clients that his product was backed by “science,”  would make them rich, and he was the only one who could provide it.

By 1909 he was recruiting teams of salespeople to approach the store owners for him.  He set up a correspondence course to teach them the anatomy of the foot and the “science” behind his products. The course was called “Practipedics” and was described as “The Science of Giving Foot Comfort and Correcting the Cause of Foot and Shoe Troubles Based on the Experience, Inventions and Methods of Dr. William M. Scholl.” The ads from this period show that he was marketing these classes and sales opportunities to both men and women, an interesting approach for a time when few women worked outside the home. The ad below shows a woman studying the Foot-Eazer and promises that “This Alone Should Pay Your Rent.”

From here, Scholl’s business expanded even more quickly.  By the time the U.S. entered World War One, Scholl was marketing to three different audiences — managers and owners of shoe stores, retail customers, and potential sales recruits — all through extensive advertising.  Hoosier State Chronicles has a wealth of examples of ads for Scholl’s products, for stores selling them, and even for the Practipedics course. Indiana shoe stores often advertised special days where Scholl’s salespeople, presented as medical experts in foot care, would be at the store for personal fittings. In a 1917 issue of the Indianapolis News, the New York Store advertised their latest shoe styles and noted that they carried “A Complete Line of Dr. Scholl’s Foot Comfort Appliances.” In 1920, the South Bend Shoe Company advertised in the South Bend News-Tribune: “Foot Expert Here . . . A specialist from Chicago loaned to this store by Dr. Wm. M. Scholl the recognized foot authority.” This “expert” was most likely trained via correspondence course or week-long class and almost certainly never met Scholl.

Sometimes all three of Scholl’s audiences were targeted in one message, such as in the advertisement below from the Indianapolis News.  First, the ad promises foot comfort to the average reader and pedestrian and  explains to them the product while emphasizing the availability of “medically” trained dealers. Second, it advertises Marott’s Shoe Shop on East Washington who’s owners will have to stock up on Scholl’s products and provide the  “foot expert.”  Finally, the ad explains to the shoe dealers and other potential Scholl’s salespeople how to register for the next Scholl’s training course in Indianapolis. Additionally, Marrott’s Shoe Shop was a “Dr. Scholl’s Foot Comfort Store” which was supposed to consistently staff such  “trained” foot experts — not just for special events.  In Marrott’s advertisement which ran below the Scholl’s advertisement, the store claims that “Dr Scholl’s Foot Appliances are handled exclusively in Indianapolis by Marott’s Shoe Shop.”  However, a search of Hoosier State Chronicles shows several other Indianapolis stores schilling for Scholl — including the New York Store from the advertisement above.

Another  Indiana “Dr. Scholl’s Foot Comfort Store” was the Lion Store in Hammond.  They were one of many stores around the country to participate in Scholl’s marketing plan for “Foot Comfort Week.” They advertised their participation and “foot expert” in the Hammond Times on June 12, 1917. Even general clothing stores participated in the marketing scheme.  On June 21, 1917, the E. C. Minas Company, which called itself “Hammond’s Greatest Department Store,” advertised “Foot Comfort Week” in the Hammond Times which the ad claimed was happening “throughout the continent.”  They noted that their store carried “the complete line” of Scholl’s appliances and “experts at fitting them to individual needs.”  Later ads for the week-long event had more outrageous marketing schemes such advertisements for “Prettiest Foot” contests. Search Hoosier State Chronicles for more.

By the end of the war, Scholl’s company was established across the U.S, Europe, Egypt, and even Australia.  He had also established a Podiatry College and written a text book. However, medical doctors working in the field were quick to criticize Scholl’s entangled business and medical operations and began to publicly question his qualifications. In 1923, the National Association of Chiropodists passed a resolution condemning Scholl’s work and banning him from advertising in their publications. Again, Robert McClory’s investigative article is the best source for more information on the controversy stirred up around Scholl’s standing in the medical community.

Scholl was not slowed down by the nay-saying in the least. He continued to invent, patent foot products, and open new stores around the world.  According to McClory:

“In his lifetime Scholl would create more than 1,000 patented ointments, sprays, cushions, pads, supports, shields, springs and other mechanical and chemical gizmos for the feet. Eventually the Scholl empire would include more than 400 outlet stores and employ some 6,000 people worldwide.”

According to a short essay by Fred Cavinder in Forgotten Hoosiers (2009), during World War II, the Scholl plant in England made surgical and hospital equipment while the Chicago plant converted to the manufacture of military equipment. Cavinder writes, “As Word War II ended, Dr. Scholl invented the compact display fixture with the familiar blue and yellow colors.”

Scholl remained connected to the northwest region of Indiana throughout his life.  He resided primarily in a single rented room at the downtown Chicago Illinois Athletic Club.  However, later in life he purchased a home in Michigan City, Indiana, where he had moved  his side business, Arno Adhesive Tapes. This company made all of the plaster and tape for the Dr. Scholl products. In the 1960s, Arno also expanded greatly and Scholl, now in his seventies, remained just as active in its management.

Scholl died in 1968 and is buried in Pine Lake Cemetery in La Porte Indiana.  His family sold the Scholl’s brand to a large pharmaceutical company in 1979 and it remains successful to this day. So whether we remember him as “Dr.” or Dr. Scholl, he created an empire, changed an industry, and invented new ways to market and advertise.  Search Hoosier State Chronicles for the many more advertisements we couldn’t include here!

*The 1900 census gives his birth year as 1884, but all other records including passport applications, WWI draft card, and death records cite 1882 as the correct year.