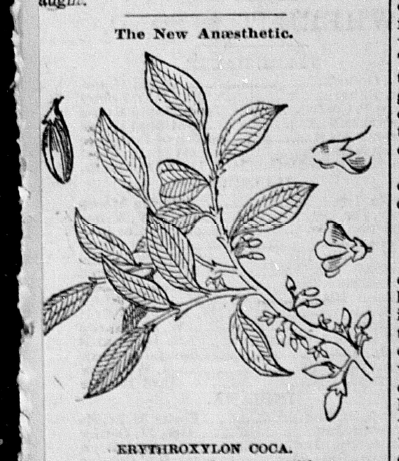 By 1884, Indianapolis newspapers were reporting on the success of eye surgeries and procedures, including tattooing the cornea, by using a brand new anesthetic… cocaine.

According to A. Grzybowki’s 2008 article “Cocaine and the Eye: A Historical Overview,” doctors had been experimenting with coca leaves in Europe since the 15th century.  However, it wasn’t until the 19th century that they learned to extract the active component: cocaine.  Early studies focused on the “many physiological and pathological effects,” as opposed to any numbing effects.

An Austrian ophthalmologist named Carl Koller is credited with discovering the effective use of cocaine as a local anesthetic for eye surgery in 1884. Koller found that a cocaine solution applied to the cornea left the eye temporarily unable to move or feel pain.  Before this discovery, it was almost impossible to operate on the eye because of its involuntary movements. His findings, published on September 18, 1884, were widely accepted and reproduced in the United States. Newspapers throughout the Midwest began reporting on the wonder drug almost immediately.  In fact, the first articles we found in searching Hoosier State Chronicles date to only one month after Koller’s discovery. The rising popularity of the drug was apparently driving up the cost.

The New Anesthetic in Indiana Apothecaries

As early as October 1884, the Indianapolis News listed the price of the “new and successful anesthetic.”

The following month, the Daily Wabash Express noted that 18 karat gold cost about $16 an ounce while cocaine cost $224 an ounce.

In December 1884, a Bloomington dentist wrote a letter to the editor of the Indianapolis News  encouraging his Indianapolis colleagues that they advertise their use of the new anesthetic in an article titled “Try Cocaine.” This tongue-in-cheek letter is referencing the high price of cocaine.  Thus, he jokes that if the city doctors advertise this expensive service, “great will be the reward reaped from their country cousins,” as most people would rather deal with the physical pain and the cost.

In response to the “country cousin” dentist, an Indiana man with the initials “S.C.,” also wrote to the editor of the Indianapolis News about the new anesthetic.  He wrote: “Hydrochlorate of Cocaine has been in use in the United States about two months . . . The anesthetic solution requires four grains in 100 drops of water.” He too complains about the high price and predicts that it will go up more, encouraging some patients to “grin and bear it” without the pain reliever.  S.C. continued: “The writer has a sample which he uses, not as a reward reaper, but to facilitate matters in examining ‘sore eyes.’ It has wonderful analgesic power in many directions, and physicians and dentists are using is as fast as they can obtain a supply – and a paying customer.”

In March 1885 the Indianapolis News reprinted “Surgery without Pain,” from the New York Tribune, describing the success of one “prominent eye surgeon” at the New York Post Graduate School of Medicine using cocaine as an anesthetic. When asked by the reporter if he uses the drug in surgery, the doctor replied: “Well, I should say so; in operations upon the eye I feel now that I could not get along without it. In general practice it has driven ether and chloroform out of the field. It is not only a wonderful discovery, but it is astonishing how rapidly it has risen into favor.”

The surgeon went on to tell the story of Dr. Koller’s recent discovery of cocaine as a local anesthesia in September 1884 and its immediate experimental adoption in the US.  He stated: “There is hardly a field in which it has not been used with success. Too much cannot be said in its praise in surgical operations upon the eye, ear and nose.”

On February 21, 1885, the [Terre Haute] Saturday Evening Mail ran an article detailing the history and medical uses for cocaine, including eye surgery.  By dropping a cocaine solution “2 to 20 percent” the eye was made insensitive  “and the most trying operations may thus be performed . . . without pain.” The article also contained a deadly-sounding recipe for a crystallized version of the drug that not only used ether, but also lead.

On April 15, 1885, the Indianapolis News also reported on “Cocaine, the new anesthetic” and how a patient not only “submitted to the ball of his eye being punctured by a delicate spearhead knife,” but also “chatted pleasantly with the operator” during the surgery.

One June 2, 1885, the Indianapolis News ran a story claiming a patient felt “no pain during the section of ciliary or optic nerves” when a 20% cocaine solution was applied before the operation and dropped on the eye throughout.

The Greencastle Times reported on a doctor who used cocaine for eye surgery in 1889, only this time the patient was “a very fine hunting dog, who had got a thorn in his eye.”  The good doctor applied a 5% cocaine solution to the dog’s eye, removed the thorn, and the dog “soon trotted home as well as ever.”

Perhaps most interestingly, the Crawfordsville Review reported that “the latest discovery of scientific medical men is that the human eye may be tattooed any color.” The procedure is recommended for blind or “dead” eyes in order to “restore it to its natural appearance, so that nothing but the closest scrutiny can detect the difference between it and its fellow.” The eye was covered thickly with India ink and then punctured “by means of a little electrical machine which operates a specifically made needle.” Of course, this 19th-century medical miracle was also brought to us by cocaine.  According to the article, “The operation of tattooing is performed by first treating the eye with cocaine until it becomes absolutely senseless to pain.”

The following year that this very procedure was successfully performed by a surgeon at the nearby Miami Medical College in Ohio.  The Indianapolis News reported, “Miss Ada Duhrens . . . has had the color of the pupil of her eye restored by tattooing with india ink.”  We can only assume she has cocaine to thank for the “lost color restored” in her eyes.

By this time, cocaine was also being used as an anesthetic for nose, throat, and for dental procedures. It was completely unregulated. Anyone could walk into a pharmacy and purchase cocaine powder or tablets. It was also the main ingredient in many “stimulating tonics” designed to combat fatigue and even soothe kids’ tooth aches. Ads appear throughout Indiana newspapers in the 1880s promoting it as a cure for hay fever, hair loss, and recommending cocaine lozenges as essential for speakers and singers.

Later, it turned out, there were some complications with the wonder drug.

For more information on cocaine and eye surgery see: