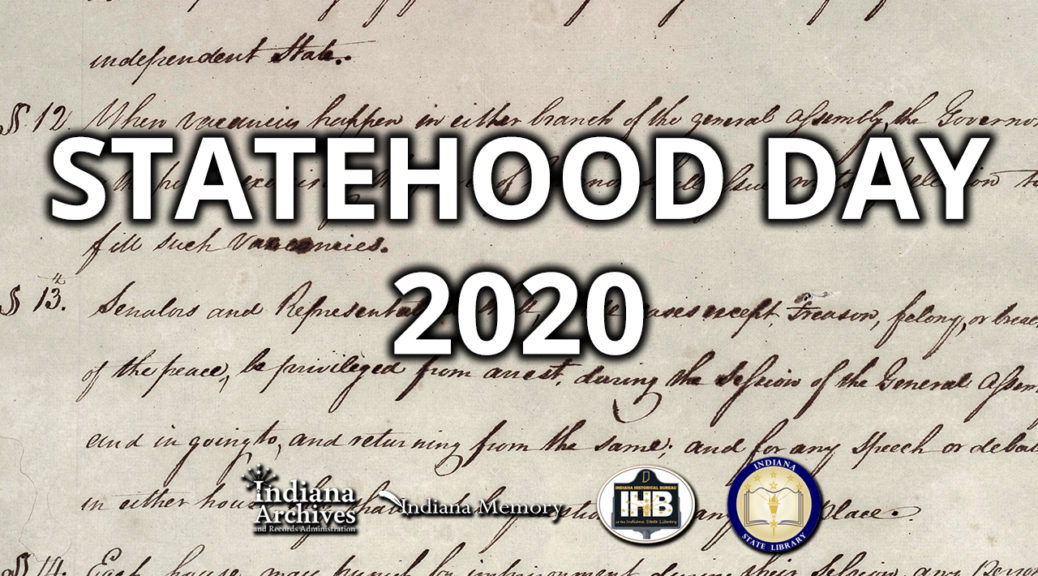 December 11th marks Indiana’s 204th birthday! Learn more about the founding of the 19th state in this video from the Indiana Historical Bureau and the Indiana Archives and Records Administration.

You can think of our constitution as a set of rules for how we live together here in Indiana. Our state and its government follow a rulebook that we’ve established as citizens, and that rulebook is our constitution.

The first Constitution was written and approved in 1816. Indiana was a lot different back then. For one, there were no cars, no fast food, and of course, no smartphones. People had to write to each other with ink and paper, travel by horse, and eat food from their own backyard or local market.

Nevertheless, 43 leaders from across Indiana traveled to a city named Corydon on June 10, 1816 to write and approve Indiana’s constitution. They were led by a young man named Jonathan Jennings. He would go on to become Indiana’s first governor. Jennings and the other delegates studied state constitutions from Virginia, Ohio, and Kentucky to get a sense of what they wanted to include in Indiana’s constitution. Like the Federal government, they decided it should have three branches: legislative (which makes the laws), executive (which carries them out), and judicial (which helps us understand them). On December 11, 1816, Indiana was admitted to the union as the nineteenth state.

There are two things to highlight about the 1816 Constitution. First, it banned the practice of slavery, over 40 years before the Civil War. Second, it provided for the creation of a public education system that was free and “equally open to all.” If you attend a public school here in the state, you have our constitution to thank for that.

The same year that our first state constitution was approved, a young man named Abraham Lincoln moved here with his family. His father, Thomas Lincoln, decided that it was best for the family to move north from Kentucky to start a new life in Indiana. Abraham Lincoln lived here from the age of 7 until 21.    Some sources say that Lincoln read copies of the 1816 constitution when he lived here. Who knows, maybe reading the state’s constitution is what inspired him to become a lawyer, or later defend the U.S. Constitution, and issue the Emancipation Proclamation during the Civil War.

Indiana’s first constitution served Hoosiers for over thirty years. Then, in the fall of 1850, a group of leaders met to make broader changes to the state constitution. The new constitution strengthened the state’s commitment to education and ensured that the state didn’t spend more money that it brought in. This is like when you get an allowance from your parents. Our constitution is written to make sure we don’t spend more of our “allowance” from taxes. After over 150 years, we still live under this constitution.

That doesn’t mean that our current rulebook is the exact same as it was in 1851. Sometimes we vote on amendments to the Constitution, which change the rules or make new ones. Our 1851 Constitution included an Article that banned Black people from moving to Indiana. A few years later, the state Supreme Court ruled that it goes against our constitution to deny rights to United States citizens. Finally, in 1881, Hoosiers voted to repeal that Article and it was formally removed from the Constitution.

The most important thing to know about our constitution is that it can change, in order to improve the lives of Hoosiers all across the state. We as citizens, big or small, can use our voice to make a difference here in Indiana.  So, our state constitution represents something bigger than just rules. It provides us with the tools to make our government the best it can be.