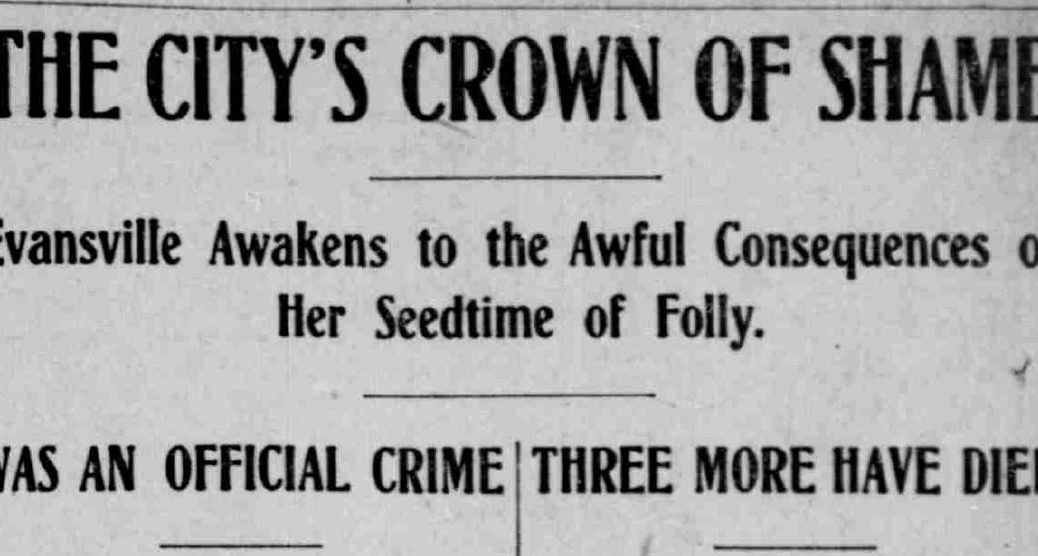 On this day in history, one of the earliest mentions of basketball appeared in Indiana newspapers.  This was a momentous occasion for a sport that would become so important to Indiana culture.

Despite popular belief, Indiana’s first basketball game did not take place in Crawfordsville.  In fact, Evansville newspapers reported on basketball being played in their city nearly sixteen months before the Crawfordsville game occurred.  Evansville even played an inter-city game against Terre Haute seven weeks before the Crawfordsville-Lafayette game on March 16, 1894.  I made these discovery using digitized newspapers, and published my findings last December in the Indiana Magazine of History.

Here are a few newspaper clippings from Indiana basketball’s beginnings in Evansville.

Note: Because most of these newspapers were digitized by a commercial firm for the Evansville Vanderburgh Public Library (EVPL), they are not freely available through Hoosier State Chronicles.  However, EVPL resident cardholders can access the content for free.  Visitors to EVPL can also access the digitized newspaper collection on-site.

The Evansville Daily Journal of Vanderburgh County was established in 1834 by William Town but did not appear as a daily until 1848, a year after Evansville was recognized by official charter as a city of Indiana. Town relocated to Evansville from the east and worked as both a grammar school teacher and printer. In March 1834, he disseminated the first issue of the Evansville Journal and General Advertiser, which was a pro-Whig (later Republican) paper. He remained the newspaper’s owner until his death in 1839.

In 1848, Addison H. Sanders purchased the Journal from William Chandler. Sanders oversaw the increased circulation of the Journal throughout southwestern Indiana between 1849 and 1856. He focused on improving the city department portion of the newspaper. The expansion of the paper paralleled the economic growth of Evansville during the 1850s, when the population of the city grew to 4,700. White newcomers were attracted to jobs with railroad firms, saw mills, and factories. Free blacks living in Evansville (about a hundred) also held both skilled and blue-collar jobs despite being barred from coming into Indiana in 1851 by Article XIII of the state constitution.

In October 1856, the Journal passed to Francis Y. Carlile. By April 30, 1858, Carlile had partnered with Indiana printers Frank M. Thayer and John Henderson McNeely. They formed the Evansville Journal Company (later Evansville Journal-News Company) and started to publish the paper under the name of that firm. Among the improvements the new proprietors made to the newspaper office was the installation of a steam engine and power press. Before more improvements could be made the newspaper office was destroyed in a fire. Its proprietors immediately arranged for the Journal to be printed from another newspaper office until it could be relocated. The company ultimately purchased a building located on Fifth Street between Main and Sycamore.

Carlile left the Journal in November 1859, selling his interests to James H. McNeely. By 1860, Evansville was the third largest city in Indiana behind Indianapolis and New Albany with a population of 11,484. Under the maintenance of the McNeely brothers and Thayer the Journal advocated for the election of Abraham Lincoln for president and unflaggingly supported the Union side during the Civil War.

John W. Foster purchased the interest of James McNeely and replaced him as partner in June 1866. Edward Tabor, a former bookkeeper for the paper, subsequently joined Frank M. Thayer, John McNeely, and John W. Foster as a partner in the Evansville Journal Company. In 1869, the Journal reported a circulation of 2,000 for its 8-page daily issues and 5,000 for its weekly issues.

Claude G. DeBruler purchased Foster’s interest and replaced him as partner in November 1872. Thayer left the Journal in 1883. James McNeely purchased DeBruler’s interest in 1885 although he had been listed in the newspaper as a proprietor since 1883. Following the departures of Thayer and DeBruler as well as Tabor’s death, the McNeelys became the joint owners of the Journal in March 1885. By 1889, James McNeely was editor-in-chief while his brother John fulfilled the role of river editor. Jessie McDonald (later Mrs. William Torrance) eventually oversaw the society department of the newspaper.

The Journal published a “Colored News” column in or near the want ads section between the early 1890s and 1909. The column had a black editor and covered goings-on in the black community such as church events as well as illnesses and funerals. Outside of the short, segregated column the newspaper’s derogatory tone towards blacks reflected the intense racial bigotry that affected the city’s black population, which at 7,405 approximated that of Cleveland, Ohio.

Bigham, Darrel E. We Ask Only A Fair Trial: A History of The Black Community of Evansville, Indiana. Bloomington & Indianapolis: Indiana University Press, 1987. Published in association with the University of Southern Indiana.