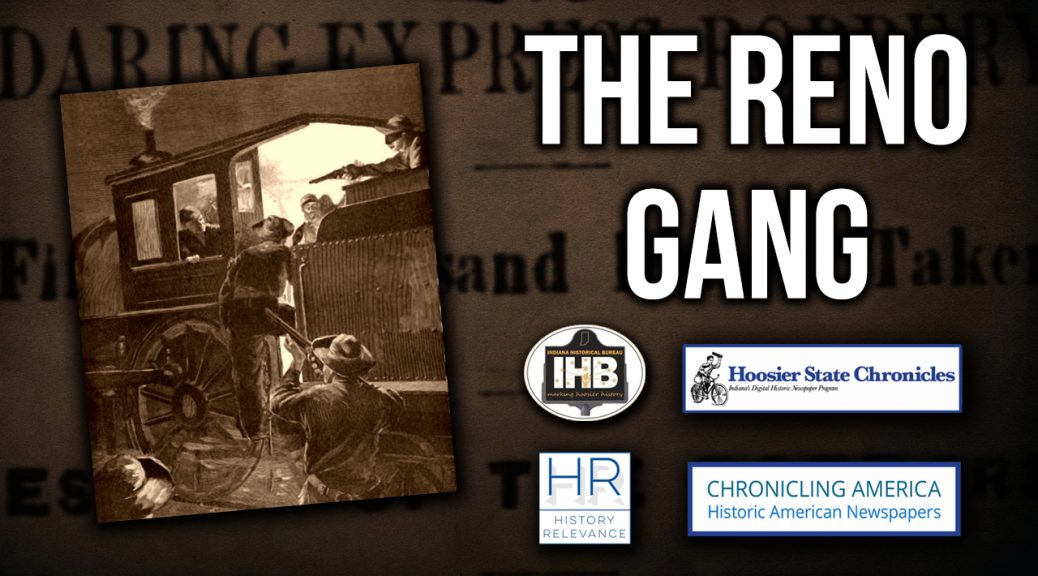 Hoosier State Chronicles is happy to announce our YouTube channel! This channel will be devoted to Indiana’s history and its relevance to everyday Hoosiers.

First up is our video essay on the Reno Gang. Often credited with the “first train robbery in America,” the Renos were a gang of outlaws that roamed the Indiana and Missouri countryside in the 1860s, stealing loot from banks and county treasuries.

While their crimes became legendary, the community’s response proved equally legendary. Local sheriffs, Allan Pinkerton’s men, Canadian detectives, and the Jackson County Vigilance Committee all strove to exact justice on the Renos and their accomplices.

In this first video, we will uncover the trail of destruction left behind, not only by the Reno Gang, but by those who punished them. Another batch of issues has been added to Hoosier State Chronicles! This batch comprises 977 issues (totaling 9,957 pages) and brings our total page count in Chronicling America to 299,200!

In the midst of the fight for repeal of Free Silver coinage in 1893, Cleveland sought the advice of the White House doctor, Dr. O’Reilly, about soreness on the roof of his mouth and a crater-like edge ulcer with a granulated surface on the left side of Cleveland’s hard palate. Samples of the tumor were sent anonymously to the army medical museum. The diagnosis was not a malignant cancer, but instead an epithelioma.

Cleveland decided to have surgery secretly, to avoid further panic that might worsen the financial depression. The surgery occurred on July 1, to give Cleveland time to make a full recovery in time for the upcoming Congressional session. Under the guise of a vacation cruise, Cleveland and his surgeon, Dr. Joseph Bryant, left for New York. The surgeons operated aboard the Oneida, a yacht owned by Cleveland’s friend E. C. Benedict, as it sailed off Long Island. The surgery was conducted through the president’s mouth, to avoid any scars or other signs of surgery. The team, sedating Cleveland with nitrous oxide and ether, successfully removed parts of his upper left jaw and hard palate. The size of the tumor and the extent of the operation left Cleveland’s mouth disfigured. During another surgery, Cleveland was fitted with a hard rubber dental prosthesis that corrected his speech and restored his appearance. A cover story about the removal of two bad teeth kept the suspicious press placated. Even when a newspaper story appeared giving details of the actual operation, the participating surgeons discounted the severity of what transpired during Cleveland’s vacation. In 1917, one of the surgeons present on the Oneida, Dr. William W. Keen, wrote an article detailing the operation.

Cleveland enjoyed many years of life after the tumor was removed, and there was some debate as to whether it was actually malignant. Several doctors, including Dr. Keen, stated after Cleveland’s death that the tumor was a carcinoma. Other suggestions included ameloblastoma or a benign salivary mixed tumor (also known as a pleomorphic adenoma). In the 1980s, analysis of the specimen finally confirmed the tumor to be verrucous carcinoma, a low-grade epithelial cancer with a low potential for metastasis.