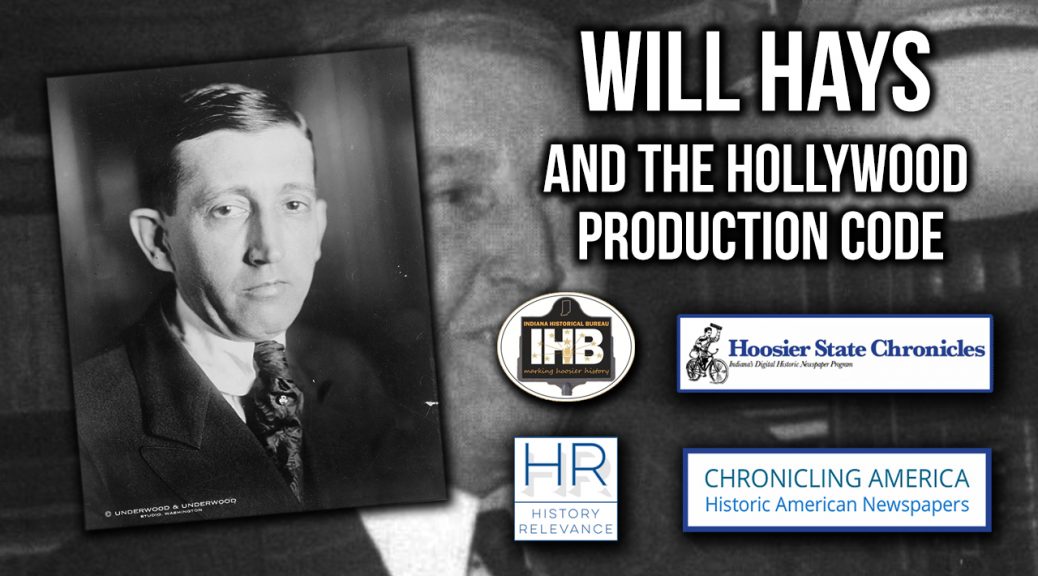 At just 110 pounds, Sullivan, Indiana-native Will Hays was not exactly the imposing figure you’d expect to be the film industry’s regulator, but he nevertheless left a substantial mark on the movie industry during the first half of the twentieth century.

To learn more about Will Hays and the MPPDA, check out Stephen Vaughn’s article from the Indiana Magazine of History.

Footage of Will Hays and Irene Dunne courtesy of the Indiana State Library.

The “Me Too” movement has become a serious force for change in Hollywood, after many prominent figures in the film industry have been exposed for abusing their power and abusing other people. For us historians, it recalls how the industry faced a similar crisis nearly a century ago, with widespread reforms that were felt for decades.

For many of the early years of American cinema, there was little censorship on the content in films. Hollywood had also developed a reputation for fast living and scandalous behavior, and the event that likely catalyzed a systemic change came in 1921. Silent film star Roscoe “Fatty” Arbuckle, whose comedic films rivaled contemporaries Charlie Chaplin and Harold Lloyd, became embroiled in a massive scandal involving the rape and death of actress Virginia Rappe. While Arbuckle was never convicted of a crime, the scandal effectively ended his career.

This seismic moment, among others, convinced the studios to create the Motion Picture Producers and Distributors of America (MPPDA). Their choice for President was an unlikely candidate, given his traditional, Midwestern background, but he nevertheless left a substantial mark on the movie industry during the first half of the twentieth century.

At just 110 pounds, Sullivan, Indiana-native Will Hays was not exactly the imposing figure you’d expect to be the industry regulator, but his years in national politics had prepared him for the role of his life. A local lawyer and Indiana politician, he rose to national prominence serving as chairman of the Republican National Committee from 1918 to 1921. His role as campaign manager for Warren Harding’s successful 1920 presidential bid landed him an appointment as Postmaster General.

It was his modernization efforts with the post office, including new efforts with radio, which impressed Hollywood executives when they chose him to run the MPPDA in 1922. His politics and personal demographic also convinced them. His “extensive Republican connections and staunchly pro-business stance gave him the best chance of defeating pending censorship legislation.” Additionally, his pious, Presbyterian background and Midwestern sensibilities persuaded the “predominantly Jewish moguls” that his leadership would “make the movie industry more acceptable to Protestant America.”

In its early years, Hays and the MPPDA devoted much of their energies to public relations, building partnerships with local civic organizations and publishing materials touting the industry’s positive effect on American culture. They also instituted a set of editorial “don’ts” and “be carefuls” for film producers in 1927. However, the MPPDA and Hays are best remembered for the Hollywood Production Code, instituted in 1930. Even though his name is on it, the code was a collective effort between the MPPDA and prominent Catholic leaders within the film industry, namely publisher Martin Quigley and George Cardinal Mundelein of the Chicago Archdiocese. The code put strict limitations on depictions of violence, sex, crime, and drug and alcohol use. Conversely, it encouraged patriotism, law-abiding behavior, and religious moral values.

Despite all the major studios signing on, the code was basically a paper tiger until 1934. Only after pressure from the newly-formed Legion of Decency did Hays establish the Production Code Administration (PCA). He tapped Joseph Breen, a journalist and “militant Catholic laymen” who harbored anti-Semitic views, to run the agency. And run it, he did. For the next two decades, any major motion picture made for audiences had to have the PCA’s, especially Breen’s, blessing before distribution. In essence, Hays was the public face of the film industry’s self-regulation while Breen was the behind-the-scenes gatekeeper of what he deemed decent. While filmmakers often justifiably bristled at the industry’s zeal for self-censorship, many classic and well-beloved films came out during the period. Studios did what they thought they had to do to stave off the federal regulation of films.

Hays retired from the MPPDA in 1945. Despite some of its controversial moves, the Sullivan Daily Times ran an editorial praising the MPPDA, and in particular, Hays for his years of service to the industry. “He taught Hollywood’s fiercely individual captains to meet at the conference table and co-operate sanely for their common purposes . . . . [and] Above all, from the point of view of the average citizen, he waged a constantly gaining battle for good, clean movies.” After his retirement, the organization was renamed the Motion Picture Association of America (MPAA). During the 50s and 60s, and notably after Joseph Breen retired in 1954, the production code lost cultural and artistic relevance within the Hollywood system. In particular, filmmakers like Otto Preminger demanded less censorship and made films that challenged the code. After years of waning importance, the MPAA replaced the code in 1968 with a ratings system that is still in use today.

Hollywood’s reputation at the start of its golden age needed a serious public relations facelift, and after all the scandals and indiscretions, Will Hays was exactly the kind of man for the job. His pioneering role as President of the MPPDA created the modern and often controversial regulatory system that is largely still in place today. The hope for us is that our current moment encourages us to reflect upon the industry’s history, learn from its successes and failures, and advocate reforms that will improve the environment while inspiring great films.

Thanks for watching. Please click “like” in you enjoyed this video and make sure to subscribe to keep updated on all new videos. To learn more about Will Hays and the MPPDA, check out Stephen Vaughn’s article from the Indiana Magazine of History. The link is in the description. Finally, have you seen any films made under the Hays Code? Did you think Hays made the right decisions during his time at the MPPDA? What do you think of the current ratings system today? Leave your answers in the comments below. We want to hear from YOU.