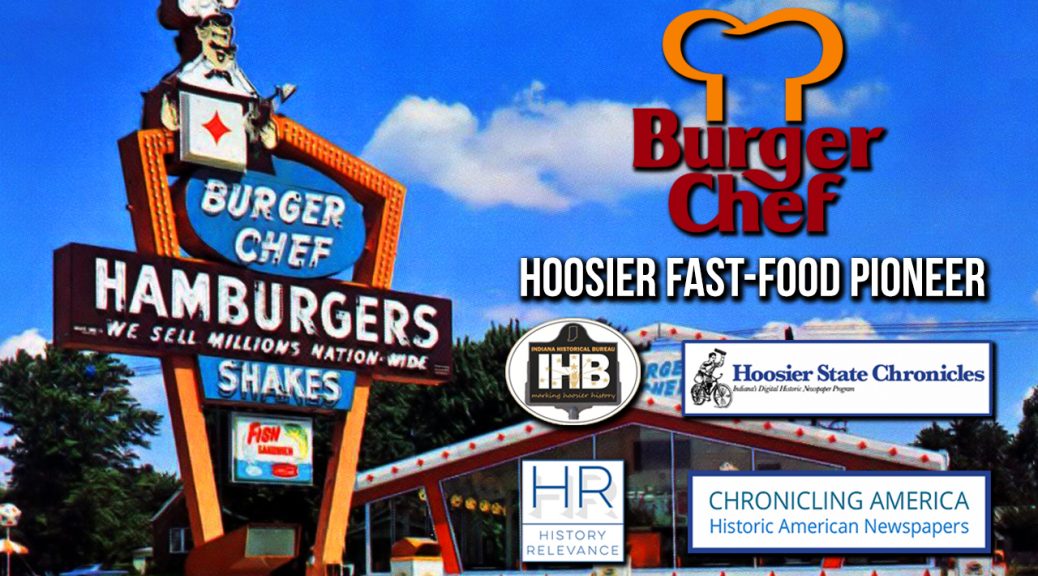 Summer is upon us, and one of the staples of American summers is fast food. It’s always a blast to roll down the windows, crank up the tunes, and head on over to your favorite drive-thru. Now, we all know about the classics: KFC, Taco Bell, Burger King, and of course, McDonald’s. But there’s one fast-food giant, wildly popular from 1950s through the 70s, which almost beat them all. That was Burger Chef.

Burger Chef was founded in the mid-1950s by Robert Wildman and Brothers Frank and Donald Thomas. You know that “flame broiled” cooking style that Burger King has for its burgers? These guys perfected that technique with the broiling machines they designed and manufactured for their company, General Equipment Sales Inc. Deciding that the technology was just too lucrative to only license, they decided to open up their own chain of burger restaurants, with the first Burger Chef opening in Indianapolis in 1957.

From there, they were off the races, and fast. Within two years, they had over 40 restaurants throughout the Midwest. By the 1960s, they were only second to McDonalds, and at their peak in 1972, Burger Chef had roughly 1,200 restaurants across the country.

Their “open broil” burger technique was also super innovative; by the mid-1960s, it could put out around 2,000 cooked burgers an hour. This translated to only a 20-second wait between ordering and your sandwich being ready. Their signature item, the “Big Shef” (with a “s” for copyright reasons), was added to the menu in 1964 and comprised of “two hamburger patties, cheese, lettuce and sauce.” It also had a bun in the middle, in what could be described as a proto Big Mac, later introduced in McDonald’s restaurants in 1967. They also had a fish sandwich and introduced the “Fun Meal” for kids in 1973, six years before the McDonald’s “Happy Meal.” In 1972, “they launched a “Quality Improvement Plan” that led to grilling buns and experiments with salad bars – a decade earlier than any competitor.”

Burger Chef also excelled at marketing. They often had giveaways, “from balloons and suckers to live goldfish and holiday mistletoe,” and even did meetups with celebrities. Actor Burt Ward, best known as Robin from the “Batman” television series, did a meet and great at a Kokomo franchise in 1973. However, they will be best remembered for their mascots, Burger Chef and Jeff, a loveable duo whose hearty smiles adorned many ads.

In 1968, the Thomas’s and Wildman sold Burger Chef to General Foods, who were best known for their packaged foods like breakfast cereals. After its sale to General Foods, Burger Chef began a slow decline in the 1970s. They just couldn’t recapture the magic, despite their investments in modernization and different menu options.

Tragically, their bigger public setback came after four employees were murdered. On the night of November 17, 1978, the workers at the Speedway Burger Chef were kidnapped. They were found dead two days later in Johnson County, with “two of them had been stabbed, while the others were shot execution-style.” The funeral of one of the young kids, a 17-year-old African American named Mark Flemmonds, was covered in the Indianapolis Recorder. To this day, the murders remain unsolved.

After years of mismanagement and declining profits, General Foods sold Burger Chef to Hardee’s in 1981, for roughly $44 Million dollars. Over the next 14 years, most locations were either converted into Hardee’s or closed. The final Burger Chef restaurant, located in Cookeville Tennessee, closed in 1996.

Despite being gone decades, the legacy of Burger Chef lives on. Many old locations still exist, either as different restaurants or completely different businesses. Fans have developed online communities that document old locations, share the company’s history, and recall personal stories. Hardee’s even brought back the Big Shef for a limited time in 2001, 2007, and 2014. The hit AMC show Mad Men also weaved Burger Chef into a storyline. No matter their ups and downs, the story of Burger Chef is one of Hoosier innovation at its finest. Their slogan says it best: “Open wide America, you never can forget. You get more to like at Burger Chef.”

Thanks for watching. Please click “like” in you enjoyed this video and make sure to subscribe to keep updated on all new videos. You can also check out classic Burger Chef ads in Hoosier State Chronicles. The link is in the description. Finally, do you have any memories of Burger Chef? What were some of your favorite menu items? Were you a loyal customer or an employee? Leave your answers in the comments below. We want to hear from YOU.